About my Shruti Box

The Shruti Box I play is an MKS-Professional from Calcutta.

I bought it from an Indian music shop in Toronto called Kala Kendar.

Shruti means "to hear" or "the act of hearing", so the Shruti Box is said to capture the attention and "melt the brain into the heart".

I first learned of it and how to play from my friend Marci, who learned from Meenakshi of the kirtan band Swaha.


Swaha - with Meenakshi playing harmonium
Marci taught me how to open and close it and how to work the bellows.  She gave me a permanent marker, scissors and a sticky label and showed me how to make tiny labels to mark each peg with its note.

I wrote out her chart of two-note chords to play when you're singing in a particular key (not that any of that meant anything to me at all!).  She played me a couple of Meenakshi's compositions, and that was it!

Within a couple of weeks, Marci and I had figured out dozens of simple arrangements for songs from the Sivananda Kirtan Book by taking turns playing on video calls via Skype.

The Shruti Box has accompanied me to yoga classes ever since!  I am very grateful! 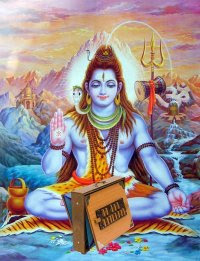 Typically it is a background drone instrument that accompanies chanting or other musical instruments.

I play it this way when I chant Sanskrit mantras, or sutras and slokas like Patanjali's Yoga Sutras and The Bhagavad Gita.

I also like the simplicity of the drone and the simple arrangements to introduce kirtan to students new to the practices and language of Bhakti Yoga.

If you would like a copy of my first (and only, so far!) cd, contact me at: