Since Shimshai sang this lullaby of Yogini Queen Madalasa on Sunday night, it has been going around and around in my head...

Now that we're in the last third of this year's Navaratri celebration and honoring Saraswati, the goddess of wisdom and purity, it seems especially fitting.


I'm finding alot of variations on this upadesha (instruction), but I've put together text, transliteration, and translation to the best of my ability below.

To see where I got the Devanagari from, click here.  Please note, I corrected the transliteration, and merged the translation with Shimshai's English version... whew!!

If you find another version of the Devanagari, or have Shimshai's transliteration (which doesn't seem to match this), please let me know.  You know what a yoga geek I am... I'm dying to work out a Shruti Box version!  Jai Ma!

"Madalasa says to her crying son:


Lakshmi is the goddess of beauty and abundance.

As a tribute to her this Navaratri, I'd like to salute some of my favorite fashion bloggers.

You may be wondering... what does this have to do with yoga?
Well, not much from the point of view that says not to be attached to material appearances...
But from another vantage point, why not acknowledge and appreciate the grace with which these earthly goddesses share, inspire, empower and uplift.

I am in awe of their generosity, humor, whimsy, cleverness, elegance, dedication, openness and individuality.

As John Fluevog puts it, "Style is Grace".

Thanks and beautiful blessings to:

﻿
﻿Every Navaratri I read the Devi Mahatmya, the story of the Divine Mother's battles with the forces of evil!

In it, she helps destroy Madhu and Kaitabha who come out of the dirt in Vishnu's ears while he is in Yoga Nidra.

Then she defeats Mahishasura the Buffalo-Demon.

Later, she vanquishes the dreaded Raktabija who can replicate himself from drops of his blood.

Finally she slaughters Sumbha and Nisumbha who rudely pull her by the hair and try to force her into marriage.

Although it sounds gruesome, I remind myself that these "demons" represent negative thoughts.  And the goddess, our own inner light.

Did you know that Durga has 108 names?

Here are a few examples:

Bhavani: The Abode of the Universe

Chamunda: Slayer of the Demons Chanda and Munda

Nitya: The Eternal One

Tonight is the beginning of Navaratri, nine nights of annual celebration dedicated to the Divine Mother!

For three days, we celebrate the Divine Feminine in the form of Durga, the fierce warrior who clears away the demons of our ignorance.

Then for three days we honor Lakshmi, the beautiful and generous Mother who bestows wealth and abundance.

The last three days are dedicated to Saraswati, the embodiment of wisdom and creativity.

There are many ways to honor Shakti, or the creative feminine power within and around you.

You may like to place reminders around your home or workplace in the form of flowers, images, or symbols.

Kali's Kitchen is still working toward our goal of donating one million grains of rice through the United Nations World Food Program on Freerice.com.

Learn and donate for free!

﻿﻿﻿﻿For every question you answer correctly, you donate 10 grains of rice to hungry people around the world. 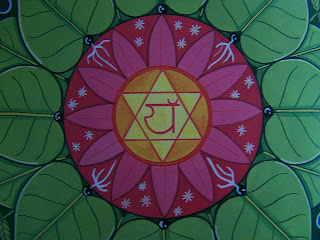 Brian McLeod and Gord Oaks are opening for Shimshai in Edmonton on October 21st!

And check out Brian and Gord with Martin Kerr earlier this summer!
at October 15, 2012 No comments:

Legends of Yoga: The First Guru

Tradition says that Shiva is the Adi-Guru or first teacher of Hatha Yoga.

Wanna hear the story of how yoga first came to human beings?

Shiva's first student was Parvati, the Mother of the World and his beloved consort.  She was saddened by the suffering of human beings.  Out of compassion, Shiva shared these teachings with her.

Some stories say they went to a small island or a remote riverbank or a deserted beach.  Others claim they had a beautiful bubble lair at the bottom of the ocean.

(Lol!  This always makes me think of Maxwell Smart's "Cone of Silence".)

As Shiva spoke, a fish (Matsya in Sanskrit) overheard.  Shiva turned the fish into a Siddha, or realized being who became known as Matsyendranath or the Lord of the Fishes.

Others say that Matsyendranath was swallowed by a fish when he was just a boy.  The fish happened to be resting near the divine couple as they were discussing the secret wisdom of yoga.  From within the belly of the fish, Matsyendranath overheard.  He practiced what he learned with vigor and determination.  When he escaped from the fish belly twelve years later, became a fully realized master and a liberated soul.

Either way, Matsyendranath became the second teacher of yoga, the one who brought it to humanity.  He is revered by Hindus and Buddhists alike as a Guru in both paramparas, or lineages of yoga.

As the first human guru was known for meditating in a particular asana, the position became known as Matsyendrasana, or the Seated Spinal Twist, one of the few postures described in the Hatha Yoga Pradipika.

Ardha Matsyendrasana, or the Half Spinal Twist is one of the twelve basic postures in a traditional Sivananda yoga class.  It has numerous benefits for the abdominal organs and the spine, and helps to rouse latent spiritual energy.

Some versions claim that Parvati fell asleep and missed the whole teaching.  Perhaps this is a metaphor for the human condition.  The yogis say we spend most of our lives unaware of our own potential and therefore unable to fulfill it.

Or perhaps it is a reference to Kundalini Shakti, the spiritual force that lies dormant or "asleep" in the Muladhara chakra at the base of the spine waiting to be channeled upward.

However you interpret this mighty fish tale, it highlights the power of yoga to transform.
at October 05, 2012 1 comment:

The Three Deadliest Words in the World: It's a Girl

October 11th is the United Nations International Day of the Girl Child.

In honor of girls everywhere, the Indo-Canadian Women's Association in Edmonton is hosting a screening of the film It's a Girl 7 pm at the University of Alberta.

"In India, China and many other parts of the world today, girls are killed, aborted and abandoned simply because they are girls. The United Nations estimates as many as 200 million girls are missing in the world today because of this so-called “gendercide”.

Girls who survive infancy are often subject to neglect, and many grow up to face extreme violence and even death at the hands of their own husbands or other family members."