Goddesses of Creation at the Art Gallery of Alberta 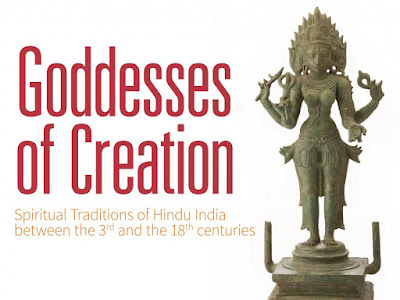 She is devouring, ferocious, and awe-inspiring. She is nurturing, tender and benevolent. In Hinduism the Goddess (Shakti) enacts the cycle of creation as envisioned by the Gods Vishnu and Shiva. The Goddess is represented in various forms throughout the history of art in India, and in classical Sanskrit religious literature, like the Mahabharata and Ramayana.
Recent scholarship asserts that many important characteristics of the female divine are derived from folk and oral traditions, as well as from aristocratic and literary ones. For example, the Goddess Kali can be seen to have roots in the fierce Goddesses of village traditions, and as such has been called by revered Hindu scholar A.K. Ramanujan a "Goddess of the Tooth". In contrast, he calls the benign and motherly Lakshmi and Bhudevi "Goddesses of the Breast." Featuring the return of the AGA’s 12th century Shiva Bhairava, the exhibition encourages the viewer to discover the multiplicity of forms and meanings in these images of the Goddess.